Posted on December 16, 2013 by heatheradamson 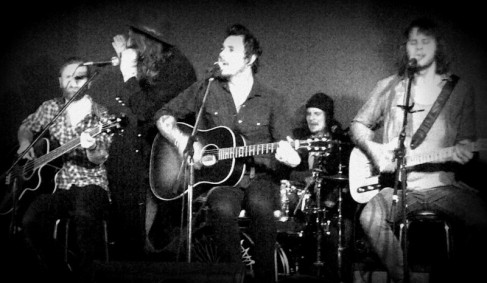 So first things first, what kind of musicians plan a full out tour in Canada, in a van, in the dead of winter, right before Christmas? Well that would be Rolla Olak & Willhorse.  And for those lucky enough to live in a town where they have a scheduled show, let’s just say seeing these guys live is a gift that keeps on giving.

For our crowd, the show had been a highly anticipated one.  Sold out almost upon the date’s announcement, the audience arrived in a bus full of friends and co-workers who had chosen the concert for their holiday gathering.  Needless to say it was hands down the best staff party on record.

Where to even begin.  The appropriately named Winter Wolfpack Tour exemplifies the brotherhood that has formed between Rolla Olak and Willhorse.  Having been introduced when paired up at the beginning of this year’s Peak Performance Project, Rolla headed out to spend a week with the guys of Willhorse on their home turf in Golden BC to get to know one another and have a head start on the songwriting process before the competition’s bootcamp this past August.

What formed was a friendship that has spawned multiple collaborations and support for each other’s careers that naturally led to the idea to form a legit tour.  Rolla started out the night for our venue’s show, but it wasn’t long before the Willhorse boys were brought up to share the stage and amp up his set list.  Likewise, when Willhorse performed, they called upon Rolla many times to join them, showcasing their closeness as friends and musicians who gel on stage as if they have been playing together for years.

But as much as it would be an easy fit to see Rolla become a permanent fixture of the band, that is not to be his fate. 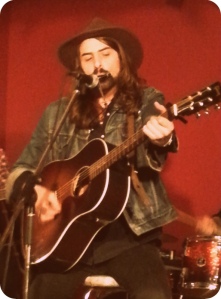 Rolla is a true folk renaissance man for our time.  He has a depth to his soul and his artistry that is unmatched. Murmurs in the audience attributing him to the early Neil Young did not go unnoticed, as he carried the room armed only with his acoustic guitar and harmonica.

Growing up on Vancouver Island, Rolla has a deep love for the West Coast and the geography that has inspired his respect and appreciation for the environment. But his connection to his BC roots may not be enough to keep him here.  After going through the experience as a top 20 finalist in this year’s Peak Performance Project, Rolla challenged himself to look inward and discover what truly motivates him in the world of music and where his future path should lead.  As an accomplished songwriter with credits on multiple Canadian and International releases,  Rolla plans to set his sights on more opportunities to collaborate with other artists as a songwriter and producer.  Although he will continue to write and play his own material, he has discovered that understanding your greatest strengths can allow for more of a focused heart as a musician and artist.  This focus however will likely take him south or out east to larger centres like LA and Toronto where there are high volumes of musicians who are eager to work with him.  The feeling you get when around him is full out mellow.  It is not hard to imagine how he would put any fellow artist at ease and set the tone for some pretty incredible creative energy to flow. We witnessed exactly this as he brought out the best in his fellow tourmates, Willhorse.

The men of Willhorse personify what most would consider pure rock stars.  Having my own preconceived fantasies of the band being a living form of the fictitious Stillwater from Cameron Crowe’s Oscar winning film Almost Famous, meeting them pretty much blew that dream out of the water.  There is nothing better than having all of your expectations completely exceeded.

Playing more of a stripped down acoustic set for our lucky crowd, not only did the guys of Willhorse showcase their exceptional musicianship and presence on the stage, our intimate venue proved how remarkably humble and accessible they are off of it.  For a band together only 2 years, the tightness to their sound, package and overall vision is intensely felt.  Having recently come out of the Peak Performance Project placing fifth out of the top 20 artists selected in BC, their graciousness in receiving their placemement solidified their reputation as class acts within the competition and put them in a position of high regard for their accomplishments to date and future plans as a band. 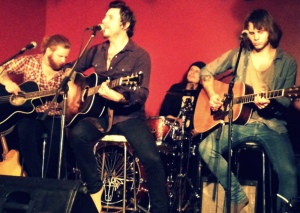 Ironically for Willhorse, the Peak experience focuses mainly on the business aspect of being a professional musician, and for the most part, they have that pretty well covered with their resident bass player and manager, Todd Menzies.  With years of experience in the industry on both sides of the playing field, Todd brings a fierce business sense to the band that has elevated their stature in a very short amount of time.  With highly respected connections that run deep among musicians, agencies, and venues alike, Todd is both the anchor and captain who is keeping them focused and guiding their decision making, not that you would be able to glean this from their performance.  Like many a bass player, Todd does his job on stage, but for the most part stays out of the way.  He plays his instrument effortlessly and gives all of the limelight to his fellow bandmates.  If you didn’t ask any questions, the typical audience member would never guess the depth of responsibility he holds within the band and how much the guys trust him whole heartedly with their careers. This of course is not to say that each of them don’t bring their own strengths to make WIllhorse the band that it is.

Drummer Nick Petrowich from Regina Saskatchewan is a quick witted, towering presence among the crew.  He added some of the night’s highlights as he surprised us with his voice chops in a song’s verse or two, and got the crowd ramped up at the beginning of most with his beats. Discovering his passion and talent for music late in his rebellious teen years, Nick is more driven than ever to establish the band as a Canadian music success story.

This leads us to Saskatchewan bred cousins Jeremy Borschneck and Branden Winterholt.  On lead vocals and guitar, Jeremy is the ultimate frontman.  He creates that instant crushable appeal with his dark eyes, flirtatious smile, and winning personality. Jeremy held the crowd all night, as he shared stories of what motivated his songwriting, and teased his bandmates in a way that kept the night feeling playful and fun. The only parent among them, Jeremy’s two year old son back home in Golden is an obvious motivator and inspiration for his relentless work ethic as a musician, and his paternal instincts are kept in full use thanks to his relationship with younger cousin and Willhorse guitarist, Branden.

Branden is one of those rare musicians you come by once in a while that make you just go “wow.” Struggling with depression as a young boy, he looked up to his older cousin Jeremy whose influence and mentorship turned Branden’s life around through music, a story that is at the heart of what makes this band so special.  Locking himself in his bedroom with a guitar while most teenagers were out doing who knows what, Jeremy admits that Branden surpassed his own abilities within a few short months of playing.  A truly gifted musician, at merely 24 years old, Branden left the audience spell bound with his solos and riffs that proved age is but a number when it comes to pure born-with-it talent.

So what is it that makes these guys truly something.  I know it is often said that from great pain comes great art.  These boys have lived some serious pain in their respective young lives, many details of which are not mentioned here.  The fact that they turned to music, found one another, and created their own version of salvation is fairly profound.  When it comes down to it, Willhorse has all the right elements to become Canada’s next great rock band, so get yourself out to one of their current gigs to be able to say you met them, before they are playing venues too large for you to get the chance.

Their Winter Wolfpack Tour is on the road in BC & Alberta until December 22, 2013.

Special note: Willhorse’s song “Stoke it Up” was just named into the top 50 out of thousands across Canada in CBC’s Hockey Night in Canada Song Quest.  Go to http://www.music.cbc.ca to vote them into the top 10. Voting closes December 19, 11:59pm EST, 8:59pm PST.

Like Loading...
This entry was posted in Articles, Photos and tagged Rolla Olak, Willhorse. Bookmark the permalink.