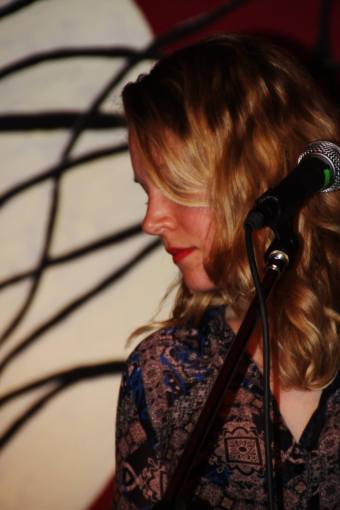 It has been over a month since I have written anything or thought about writing for that matter. The reasons why I haven’t aren’t important to discuss here, it is the reason I am now that is worth mentioning.

Over a week ago I had the pleasure of seeing Lydia Hol perform for what felt like the most exclusive house show in years at Serenity Performing Arts Centre.

The night began with special guest Larissa Tandy of Australia who recently moved to Vancouver. Hol had invited Tandy to join the tour which she gratefully accepted, if for nothing else than to see parts of BC for the first time. “This is the farthest North I have ever been!” shared Tandy. Her stripped down tunes of family tales, long distance love and her fun-filled spirit provided a strong intro.

After a short break Lydia Hol took to the stage. From the first note that left her lips I was transfixed. Even though there were only a handful of people in the living room, not only was her performance sublime perfection, her graceful appearance reflected an artist who could have been singing in a concert hall. Her respect for the listener humbled her instantly while elevating her to great heights, so much so that venue owner Shirley de Vooght offered her a place on the 2017 Harvest Music Festival bill immediately following the show.

Hol was accompanied by Alex Hauka on cello (Good For Grapes; Wooden Horsemen) who provides a depth and beauty to every piece of music he comes into contact with, and Leathan Milne on guitar, a solo artist in his own right whose talent and dedication to authenticity is just as cool as his name. She met both Hauka and Milne in the 2013 Peak Performance Project, both men had entered supporting other musical endeavours and over the years the three have remained steadfast collaborators with each other. Hauka and Milne’s support of Hol’s music was tangible, you could tell they were there because they believed in her and embraced the opportunity to play music that was clearly as enjoyable to play as it was to listen to.

In the midst of planning her first European tour, Lydia Hol was brimming with excitement about what is to come for her and her music career.

While on stage she emoted a presence that was both intoxicating and freeing. One moment I would have my eyes closed lost in the music and the next I would be glued to her on stage as she swayed with the melody or moved her hands as if conducting a symphony.

The pureness to her music and performance style provided an intimate and endearing experience as an audience member which was exactly what I needed at that moment.

A few months ago I reviewed her new album Heading North for BeatRoute magazine. You can read it here. http://beatroute.ca/2016/02/11/lydia-hol-heading-north/ After the show she provided me with a physical copy of the album as a gesture of thanks.

The thanks are all ours Lydia.

Visit her website at http://www.lydiahol.com/ to stay up to date on her tour schedule, links to social media feeds and more.