Posted on January 31, 2014 by heatheradamson

Jon Bryant. That’s a name I will never forget.  And his performance was one I will not shake for quite sometime.

Born and raised in Fall River, Nova Scotia, he now resides in Seattle, Washington, but his small town Canadian roots have not left him.  He grew up as one of 5 musical siblings to a gospel singing father, and although his faith based influences are evident, they don’t overpower his music in a way of pigeonholing it for a mass audience.  His lyrical ability is incredibly impressive as it draws you in and embraces you like an old friend.  It is something to think that he almost didn’t go through with pursuing music as a career, struggling with a decision whether to take a substantial job offer following his University studies. But like any true artist, he followed his heart, and it has led him on a path of growing success over the past 3 years.

Releasing his debut album “Two Coasts for Comfort” in late 2009 and subsequently being named not once, but twice as an iTunes Indie Spotlight Artist, Jon came out of the gates running, and he hasn’t slowed down since.  Releasing his sophmore album “What Takes You” in 2012, Jon has toured steadily throughout Canada, the US and worldwide over the past few years and his music is leaving behind a wake of dedicated fans, and with good reason.

With songs that are emotionally weighted, and have already lent themselves to prime time television placements, Jon’s music can be compared to the likes of Cary Brothers and Joshua Radin.  Let’s just say it’s not off the mark to imagine Zach Braff pinning one of Jon’s songs for a future film soundtrack compilation.  But visual media possibilities aside, seeing Jon perform live put in perspective how rare it is to hear such a pure voice and raw songwriting that literally opens your heart and fills the soul.

When it comes right down to it, Jon Bryant is one of the most well developed Canadian independent artists we have right now.  At the age of 28, after only a handful of years in the game, Jon stands above many in developing the whole package.  His homepage, facebook, twitter, and various other social media platforms are not only current (what a thought!), but they are professional, creative, and personal. They achieve what social media is intended to do, they make you feel connected to him. Upon my first visit to http://www.jonbryant.ca I felt like I had a real sense of who Jon was and the level of performance I could expect from his show.  That is an impressive thing to achieve, and it is also appreciated.  As an audience member, I appreciate when artists take the time to keep their information up to date, because it is not only a sign of respect for their fan base, it also shows a level of self respect, work ethic and vision that is inspiring and therefore makes their music that much more desirable.  And desirability is a word that is well suited to this singer/songwriter. 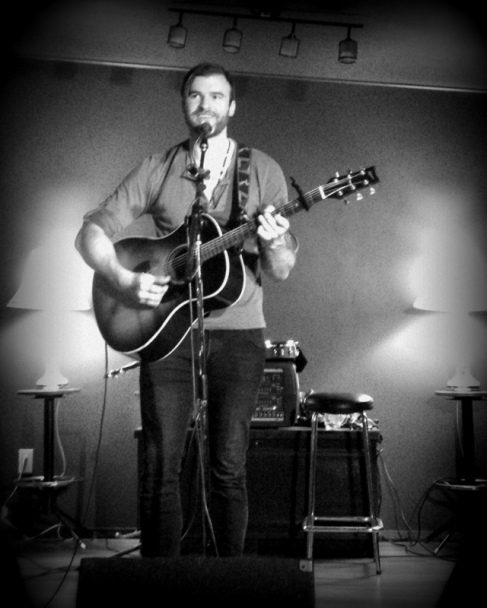 His performance included a mid set wardrobe change (nice touch), and bringing a birthday girl up on stage to play the tambourine in a spirited rendition of his song “Looks Better On You.”  These moments and more all played into his ability to hold a crowd in the palm of his hand.   The tone and richness to his vocals was enough to send anyone into pure swoon mode, but it was the character behind his voice that truly shone through.  A great voice is a great voice, but if there isn’t the personality, passion, or desirability behind it, then that’s all it is, a voice.  But when that beautiful sound is coupled with someone just as beautiful inside and out, that is what makes the few shine bright among so many.  There is no question, Jon Bryant was a star in our midst.

On the stage, Jon shared a great deal about himself, leaving us with an experience that was deeply felt.  Everything from stories behind certain songs, like “Once In A While” about a girl he met and fell in love with in Israel that subsequently led to an epic heartbreak, to speaking more generally about themes and thoughts that have been inhabiting his mind as of late.  A central theme to the first half of the evening was comtemplating his own mortality.  I mentioned to Jon afterwards that I hear many artists talk about coming to terms with their own death, and that they use their music to help work through those fears and questions.  He agreed that being a songwriter allows him to spend time entrenched in the areas of life that are rich and deep in emotional turmoil and angst, for as we all know, these are what help to inspire some of the greatest art in the world.  In Jon’s case, his song “Take Me If You Must” is about releasing those fears and embracing the unpredictability of death’s arrival all while trying to live your life to be one that is full, not necessarily long.  Because our venue is located in a small rural community, everyone always knows each other in the audience, and the impact of that song on us was wide spread.  Many in the crowd that night had lost loved ones close to them in tragedies too difficult to describe in a few sentences here, including some so recent that they crippled our community in grief, only to bring it together in remembrance and purpose.  But it was a reminder of what great music does, it cracks you wide open to help you feel and heal.

Jon invited us into his heart, and in turn stole each and everyone of ours.  Although I got a chance to briefly chat with him afterwards, I did not get the undivided time I have been carving out recently, partially due to the fact that I was not on my own timeframe this particular evening.  But to be honest, sometimes things happen as they should.  The truth is, he gave enough on the stage to write about for days.  I want Jon to know what a gift that is; to share that much of yourself with others so openly, vulnerably, and graciously. I didn’t have to spend hours talking to him afterwards to feel connected to him or his music, it happened on the stage, and that is where it should happen, and needs to for a musician to make a true impact in creating a lifelong fan base.

Although in many ways Jon and his music were a perfect fit for a house concert format, I couldn’t help but close my eyes and easily imagine listening to him in a venue as large as a stadium.  He has a voice that could translate to any size venue; it’s warmth and accessibility was wonderful for our small crowd, but it is big and powerful enough to fill an arena.

Only time will tell to see where the future of this bright young man leads, but if his work and success to date gives any indication, he is headed for a long career of enriching lives of many with his soulful voice that brought this woman to tears.

Visit his website at http://www.jonbryant.ca for links to his facebook page, tour schedule, music downloads and more.